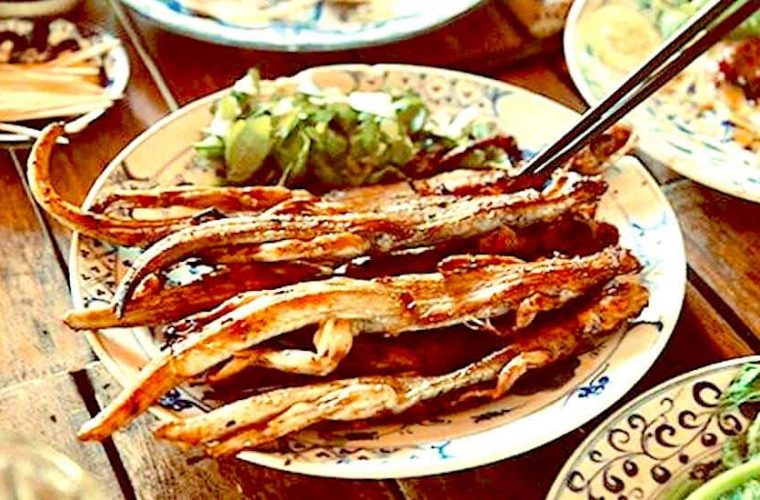 Lizards live on all six continents from the southern tips of South America and South Africa to the snowy Arctic, but most of the near 8.000 or so species make their homes in more temperate climes, and many of the largest and most unusual – and most popular at mealtime – are in the tropics. Especially in Asia and Latin America, the lizard is considered a delicacy.

Green iguanas are a popular delicacy in Mexico, Central, South America, and part of the Caribbean, at least since the days of Christopher Columbus, whose sailors reported it “white, soft, and tasty.” Lizard is brought to market still alive but grotesquely bound by their leg muscles. However, the Galapagos land iguana, Charles Darwin once wrote, yields a “white meat” that is liked “only by those whose stomach soars above all prejudices.”

Usually sold alive to restaurants where they are made in a stew or soup with local vegetables, and seasoned with garlic, cumin, cloves, and nutmeg. It is in Colombia where one of the most unusual egg-collecting practices is conducted. Iguana eggs are valued highly, so when the female lizard is thought to be about ready to lay her eggs, hunters capture the slow-moving creature, slit open the abdomen with a sharp knife, gently remove the premature eggs, rub wood ash into the wound, sew her back up, and away she goes, waddling into the underbrush to resume life and, presumably, seek another mate, while the Colombians go off to cook the eggs or sell them in the marketplace or restaurants. Iguana eggs, with their rich and tasty spherical yolks, are a favourite snack to accompany the local white rum on the Caribbean coast of Colombia.

Lizard is regarded as an exotic delicacy and restaurant diners must expect to pay a premium, just as exotic leather goods cost more than those made from cattle, pig, or domestic species. Another popular, large lizard is the chuckwalla, found in the mountains and deserts from Utah in the United States across the border into Mexico. A large chuckwalla maybe 45 cm long and may measure 8,80 cm wide, its thick tail as long as the head and body and containing nearly one hundred per cent meat. Usually, it is roasted, grilled, broiled, cooked on a spit over an open fire and consumed with vegetables, tequila and lime. Sometimes, as with other lizard species, the chuckwalla is cooked in its rough, leathery skin. After gutting it and removing the head, it is placed directly on hot coals and turned continually. When the skin splits apart, the meat can be removed.

In Việt Nam, Hong Kong, and China, the gecko or lizard is made into a strong alcoholic drink, by adding the reptiles to a bottle of strong rice wine or whisky, then left alone for about a year. Dried geckos can be found sold in street markets in China and in herbal shops in most of the world’s Chinatowns, to be ground up and mixed with hot water and drunk to cure a variety of ills. In Thailand, local chefs prefer deep-frying gecko until crispy and if it is a big size gecko it will be grilled as any other large lizard. Its preferable condiments are shredded sour mango, raw red shallots, chilli padi, hot chilli-sour dipping sauce and fresh mints.

If you want to give it a try, you can head to Le Mat village near Hanoi, Việt Nam which is full of these alcohol preserved reptiles. The weirdest thing to try is popping a snake’s beating heart and taking a shot of vodka mixed with snake blood. Sounds creepy as hell but it’s all over in a second.

Ninh Thuận Province is a south-central coastal province of Việt Nam and its capital city is Phan Rang–Tháp Chàm located 340km north of Sài Gòn, 1,380km south of Hà Nội capital; 100km from Nha Trang city. Butterfly lizard is described as sweet, delicious and tastes like chicken. The local called it “Gà đất” which means “the earth fowl” (the fowl that creeps on the face of the earth). It is considered an endemic species of Vietnam which has high value. Together with Bình Thuận Province east of Sài Gòn, these areas reach inland for several kilometres and are covered with unique dry forest vegetation, windy conditions and plenty of dunes which are the butterfly lizard ideal habitat.

Since the reptile is in high demand for its meat and traditional folk medicine, particularly in these two provinces, small coastal villages have set up farms to raise the lizard over the last twenty years. One of the top 10 priorities of agricultural development in these two provinces. For this reason, the local communities create an association that helps farmers get loans, learn farming techniques and find reliable outlets for their lizards. In the past locals used to catch the creatures in the wild, but have begun to breed them in recent years following a decline in the wild and increase in demand, domestic as well as International.

The pens are built with a concrete foundation and walls of bricks or nets to prevent the animals from escaping. Farmers create small sand mounds in the pen for the reptiles to burrow caves to live. Grass or small plants are planted on the mounds to create a natural environment. According to one local farmer that the lizards grow rapidly and have a survival rate of 95 per cent when bred in a pen. Moreover, it’s saying that raising them is easier than raising goats or rabbits and they reproduce rapidly. The butterfly lizard gets a few diseases and does not need much tending. Females can lay six to eight eggs per clutch, which hatches in 30 days.

The creatures eat agricultural produce like vegetables, sweet potato and tomato and mature in one year. “Raising butterfly lizards has helped improve the lives of local farmers,” said a resident in Phan Rang–Tháp Chàm city.

The creatures are sold in the province, neighbouring provinces and Sài Gòn, where their meat is used to make some unique dishes for connoisseurs. 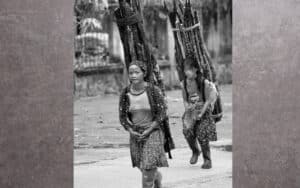